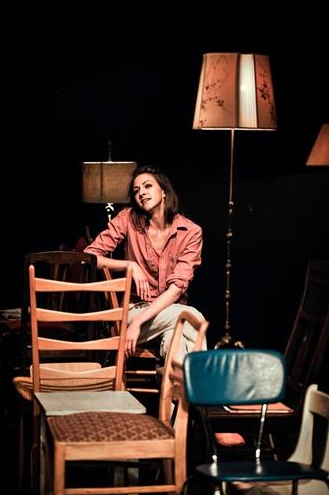 Clara: Turn the music off.
Rahel: Why?
Clara: Turn the music off.
Rahel: We like it.
Lin: Rahel, can you please turn the music off.
Clara: What a shame the GDR doesn’t exist any more, or the two of you could go back there and set up your own little Jewish choir.
Lin: You used to like the balalaika as a child.
Clara: I don’t remember that.
Lin: I’ve got photos of the two of us playing on plastic spades and singing partisan songs.
Clara: Did you explain to me what I was singing or did you just think I was cute with my spade in my hand?
Lin: You did look very cute.
Clara: Your very own little socialist mascot.
Lin: You were a very good singer.
Clara: That was before my voice broke.
Lin: I never forced you to do anything.
Clara: It was all your propaganda.
Lin: It looks like it didn’t work.
Clara: It worked very well. I developed sensors to protect me against all that rubbish.
Rahel: Do you think me learning Yiddish is rubbish?
Clara: No, languages are a wonderful thing. But why Yiddish, why not Spanish or Japanese, languages you might actually need?
Lin: Don’t be surprised if she stays in America. It’ll be all your fault.
Clara: And best of all she marries a Jewish man and they go to Israel together!
Rahel: What is it with you guys and your Jewish men! I’m not even into men.
Lin: There’s no reason for your fear of Israel here. It’s a whole different continent.
Clara: It’s all one thing! You all just want to leave! Get as far away as possible. The further away from me the better! What do you mean, you’re not into men?
Rahel: What could I possibly mean by that?
Lin: Now look how far you’ve driven her!
Clara: Me? Is it my fault?
Rahel: Hey, I’m not sick, OK?
Clara: If anything it’s your fault.
Lin: Mine? We didn’t have anything like that in my day!
Clara: You’re both doing this to upset me!
Lin: I’m not doing anything.
Clara: You’re both saying anything that could possibly hurt me!
Rahel: Oh my God.
Clara: You two are driving me crazy.
Lin: You’re driving yourself crazy.
Clara: It’s all too much for me.
Lin: You think it’s not for me?
Clara: Did I make you have me?
Lin: Oh that’s what you’re trying to say. That I forced myself on you. I’d better just go then.
Clara: Where to?!
Lin: It doesn’t matter where to!
Rahel: You know what? I’m going. I’ll go to a hotel. I can’t stand another hour in your mischpoke! I’ve had enough. ENOUGH.
Clara: Do you even know what mischpoke means?
Rahel: Yiddish for a gang of idiots who produce problems from their own midst and need them for their existence. Also known as FAMILY.